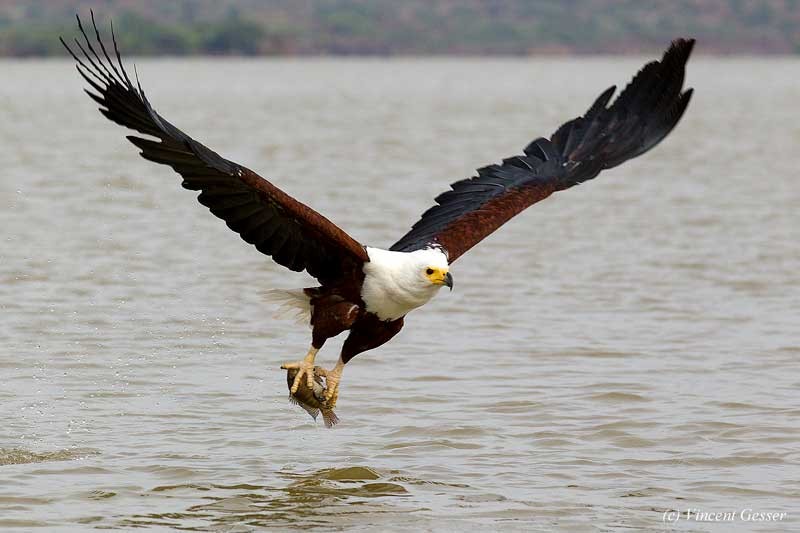 Predation is a thorny issue with fly fishermen as we all want a great fishing experience with lots of quality fish but at the same time we want to practice ecologically sustainable land management and share this beautiful environment with all the different creatures that inhabit it.

At Verlorenkloof we have a strict no cull policy when it comes to predators around the fish dams. We rather practice predator management with various methods of stocking and landscape management to try and minimise the predator’s chances of catching fish from our dams. The primary predators we face at Verlorenkloof are the African Fish Eagle, White breasted and reed cormorant, African clawless Otter and of course the two legged predators.

This Majestic bird is by far our most ferocious and damaging predator. The positive side is that they are very shy animals and rarely hunt when there are people around the dams. We also allow patches of reeds as well as pond grass to grow out around the dams to help the fish shelter from the fish eagle. You will see them mostly around Flycatcher dam were they can hunt in peace from the trees surrounding the dam.

The cormorants often get a bad rap from fishermen, probably because they are far more efficient at catching fish than we are. Fortunately for us Cormorants can’t catch larger fish as they swallow the fish whole and do not tear up a fish like a Fish eagle does so as long as we stock fish that are 800g or larger the Cormorants can do no damage to the fish population. We have found a fish once or twice that was caught but then it was too big to swallow and was left on the side of the dam. Since implementing our strategy of stocking smaller quantities of larger fish more often we have found the instances of Cormorant predation decrease rapidly. You still occasionally see them around the dams but they are hunting frogs and crabs and might choke on a large trout once in a blue moon.

The African Clawless otter can be quite a hassle and especially for fish farmers were there are very high densities of fish in the dams. On our dams we allow the reeds and pond grass to grow out so that there is more cover for the fish, this along with larger fish that are faster and more agile makes it difficult for the otters who are primarily nocturnal hunters to catch the fish. Otters hunt mostly by touch and if there are less fish around in the dams they have a hard time getting their hands on a fish. From the Otter scat (manure) we have observed that the otters that do come up into our dams to hunt are catching primarily crabs and frogs and only occasionally we will find a fish kill especially in the early mornings where there is more light for the otters to be able to chase the fish down .

Overall we feel that the predation at Verlorenkloof is not out of control and the nature is in balance as there aren’t swarms of Cormorants or mobs of Otters going around ridding us of fish. By managing the fish stockings and populations efficiently and finding a good balance around providing cover around the dams and making the environment as natural as possible we can efficiently live with the low levels of predation.