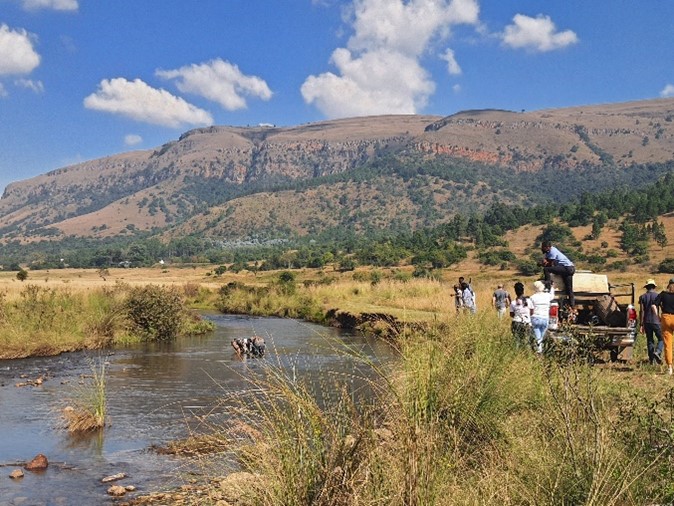 Wild trout are back in our river!

We are celebrating a huge success for trout farming after 350 wild trout fingerlings were released into a section of the Crocodile River running through Verlorenkloof.

We first noticed a decline in trout numbers after 2015 as the effect of the drought, low water flows and high ambient temperatures became evident. When the river recovered in 2017, we were incredibly surprised when we found that the surviving trout had produced a brood of wild fingerlings in the previous winter season. The optimal water temperature for trout is 15°C. Verlorenkloof measured water temperatures of up to 25 °C in extreme conditions. As temperature rises and dissolved oxygen decreases, fish begin to experience stress. A population of trout that have been selected to be more resistant to temperature stress will be more sustainable in a warming climate.

The Verlorenkloof Wild River Fish Project was the vision of Eric Johnson and started when 10 wild trout were caught in the river by a group of expert anglers, including Daniel Factor and Marius Grobler, in 2019 and entrusted to neighbouring Lunsklip Fisheries for breeding. Lunsklip Fisheries raised and took care of the brood stock, stripped, and fertilised the eggs and bred a batch of fingerlings in the winter of 2020. This meant we now essentially had new stock of wild trout!

Early in May this year, with the assistance of Marius Grobler and Conrad Jacobs from North Gauteng Fly-fishing, the river was stocked with the wild fingerlings bred by Lunsklip Fisheries. Since the release of the fingerlings, the river fishing has recovered wonderfully. The new fish have adapted well to the natural wild environment and seem to have rejuvenated the wild trout that remained in the river.

We are getting regular reports from anglers of prolific fishing, with healthy vigorous trout caught with both nymphs and dry flies. The Crocodile River at Verlorenkloof is well on its way back to becoming one of the premier flyfishing rivers in South Africa once more!